We've had a mouse problem in our kitchen of late (we hear its a bit of a problem in our area but that doesn't make me feel a lot better).  I was sitting in the kitchen working on the laptop the other day and one was climbing down the corner of the built in kitchen cupboard - what the hell was it clinging on to??  Anyway, they appear to be defying gravity, disappearing into tin air and hiding inside the smallest of cavities.  It sounds like a job for a wee cheetie, and in the absence of a cat, perhaps a very enthusiastic cocker spaniel called Toby. 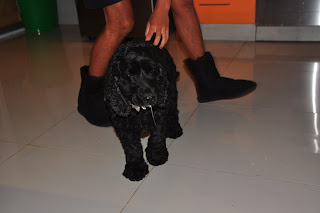 If you look carefully, you'll see a little tail and perhaps a foot hanging out of young Toby's mouth in this shot.  He managed to catch three in one night!  They were dashing between the rear of the fridge and the gap underneath the dishwasher and Toby managed to grab three of the four we saw that night.  Cleo, our other spaniel, was equally excited about the hunt but a bit slower off the mark and one mouse jumped out of the back of the fridge, ran over her head and down her back before she'd even worked out what had happened.  At least she's pretty.

We have finally got to the point where we are ready to start breeding meat birds, so we found the handsome fellow necessary to get the girls hearts a flutter.  He arrived two nights ago and made his presence felt.  He's very docile for us to handle (thankfully) but does like the girls (all 29 of them) to know he's arrived. 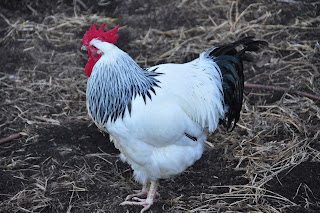 Whilst we aren't on the street, I'd still like to entrance to the house to be attractive.  Our house is on the side of the hill in the little valley we're located in and so the driveway climbs up and opens out into the garage entrance but there's only really room for two cars.  So when visitors come, they often park on the grass in front of the pool and then walk up to the house.  But instead of hiking up this somewhat steep section of the driveway, there are stairs through the garden which I think makes a much nice entrance to the house.  So I've been trying to improve that area of the garden and its slowly looking better.  Its a combination of taking out plants that don't fit the tropical feel and putting in some more that do.  See what you think 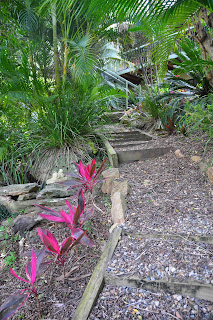 You might remember that we pinched the wonderful Selena's idea of using $10 garden arches as gates into each paddock.  We planted a climber on each archway and they are growing with varying degrees of vigour.  They have also become a handy perch for birds.  This is lovely to see, except when they are sulphur crested cockatoos who are their to pillage the mandarin tree!!!  In the pic below, you can see the creeper growing up the left hand side of the archway and that's a self-seeded cherry tomato on the right. Then that's the mandarin tree wearing a pretty little skirt as that seems to be the only thing to keep the cockatoos off.  Tragically, they ended up getting all the fruit from the top half of the tree and we're still harvesting from the bottom (some may say that's fair, but errrggg).  The interesting part is that the girls love hanging out inside the netting.  They've always enjoyed the tree for a spot of shade but they feel particularly sheltered and safe inside their little tent.  I wonder if they'll get cranky when it comes down. 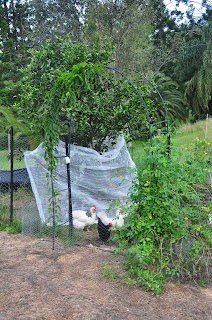 More weeding and other acts of transformation

In my recent frenzy of activity, I've also tidied up the driveway and the fence next to the patch.  The driveway was full of ferns poking out of every nook and cranny in the retaining wall, nicely offset by numerous weeds.  Very attractive on the street appeal front (even though you can't actually see it from the street, you know what I mean).  So it was lots of weeding, a few trips to the chicken run, then a bit of planting....much better 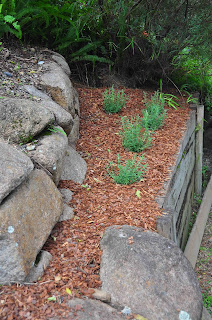 I've been doing a bit of landscaping around the pool (read "hacking out the long grass and planting some palms").  Whilst doing this, I've realised its quite a lovely view of our veggie patches and chicken runs.  It  lets you see the big picture on what we're trying to do.  We put the first chicken run in the middle of five veggie patches, and once they were all up and under production, we built the second chicken run.  The second run will now be for our layers and the first run will be for our meat birds. 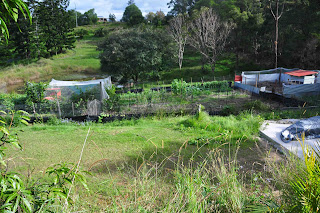 The aquaponics system has been going gang busters and particularly the tomato we put in the first grow bed.  Its a heritage variety called Green Zebra and its been growing like a triffid.  You can see it there at the back, behind the lettuces we are letting go to seed. 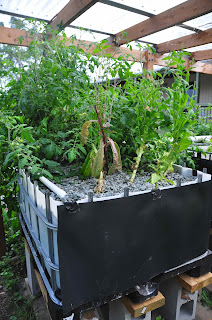 A spot of weeding

With five acres to try and manage, there are always a thousand jobs waiting for you.  Having said that, its one of the things I like about living on acreage. But one of those jobs is weeding beds you're trying to do something with.  I often take a philosophical approach to weeding and simple think of it as mulch, and just do a "chop and drop".  At least some additional organic matter is going into the soil.  But every now and again, you really want to get an area up to the next level.  And it was the Fig Tree area's time. 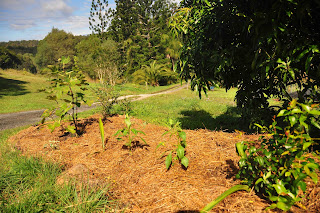 We did lots of winter planting from seed this year - black kale, cauliflower, broccoli, carrots (orange and purple, just for fun), leeks, onions, spring onions, peas, garlic, beetroot, herbs, potatoes and broad beans.  Everything is coming along nicely and we have been harvesting lots of yummy veggies. 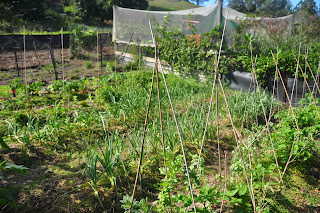 Our girls are all grown up

I know its been a long time between posts and whilst I could say something about computer issues in accessing photos, and who wants a post without pics, but let's just say that lots has been going on that I can now show you.  The biggest change is that our 20 little chicks are almost full grown now.  They are in their own run, with a brand new house (that still needs the laying boxes attached) and just weeks away from starting to lay.  Our original crew are laying about six or seven a day, now that we've past the winter solstice, so there'll be lots of quiches, baking and omelettes at our place, as well as selling the surplus.