With acreage in Australia often comes lantana.  And whilst we aren't plagued by it, there are several sections of the property that are giving it a red hot go.  Despite our two cocker spaniels, Cleo and Toby, having developed a taste for lantana shoots, its not going to go away without some serious elbow grease.  So my wonderful husband has been doing this back-breaking work for many days now, and though it doesn't feel like it to him, he's making real headway.  I don't think the previous owners had been at this gully for many years, as Shaun was finding some roots to be as thick as his arm. The upside though, as we've been discussing in our local growers group, is that the soil underneath lantana is very fertile, so once its all out, we'll have to try some productive ground cover in this spot, something that doesn't mind a bit of shade. 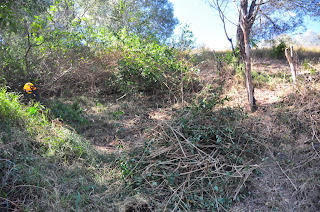 Shaun has been working hard in my absence and has finished the fencing for the new veggie garden, so we'll now have four to rotate the chickens through.  We'll have three planted out at any one time and when one season's crop finishes in the fourth, we'll let the girls in to go over it, fertilising and turning in what's left of the organic matter to improve the soil before we plant again.

The garden that Shaun has just fenced in has been left unmown so lots of delicious treats have been growing for the girls to munch on. Since Shaun opened the gate, the girls have been going to bed later as they can't seem to tear themselves away from all the good stuff. 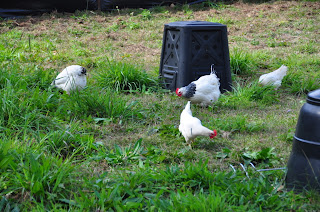 We have put weed mat under the wire fencing, which is dug into the ground.  This stops the wire from rotting but also acts as a temporary visual barrier to keep our two cocker spaniels from charging and scaring the girls.  We've started growing kiwi fruit, peas, lemon grass, passion fruit and cardamin up and against the fence so once a green barrier is created, we can bring the "not so attractive" weed matting down. 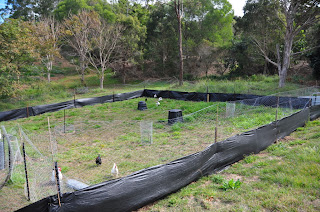 Posted by Energiser Bunny on 7.8.11 No comments:

In gardening, a few meters can matter.  Something might grow well in one spot and not another, so its always a matter of taking an informed guess and then seeing what happens.  Then if it fails, move and try again, looking for just the right microclimate.

We chose this spot for our Asian greens that get some sun, but has dappled shade from the mandarin tree as well.  Even in the winter, we thought this would be the best spot to try and sometimes, you get it right first time ...... 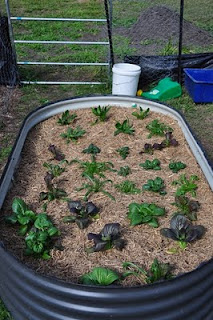 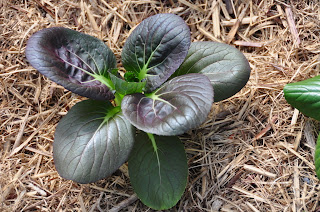 Posted by Energiser Bunny on 7.8.11 No comments: