What's going on in the patch

We currently have one veggie patch in full production, one trying to get established but under attack by slugs and possibly mice, one going to seed and another in the first stages of being planted out.  Its a wonderful part of growing your own food to watch all the cycles and seasons.  Its so exciting to plant an area out and then watch it get some legs.  Then so exciting when you start to eat out of it, but it does reach some point (at least it does for me), when you're over what's in that patch and you can't wait to let the chickens in and start afresh.  So here is the one I'm looking forward to opening the gate on soon, with rocket and coriander going to seed, but the garlic not quite ready to harvest 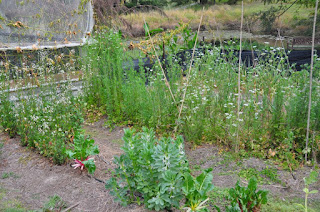 The last row in this patch was put to potatoes and we've almost finished harvesting those.  Sadly some were too close to the surface and were a bit green, despite being under the soil.  I did pile them up with compost, but clearly not enough.  As we had the space, I didn't bother growing them inside tyres as I used to in Sydney, but I might go back to that.  But this patch will get the chook treatment by the end of next month when the garlic should be ready (which you can't even see now behind the coriander)
This patch is going sat full tilt and my favourite one to wander through at the moment before dinner, basket in hand. 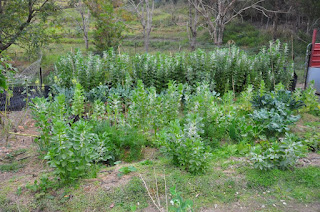 There are carrots, onions, thousands of broad beans, potatoes, cauliflower, broccoli, kale, rainbow chard, zucchini, peas (and some weeds).  The chickens get some of the kale to pump up their delicious eggs, and because they love it so much.
Patch two, which I don't have a photo of as it turns out,  is trying so hard to get established but we've had a few set backs.  I think mice ate the corn I planted as it hadn't come up in three weeks, and when I dug around to check, every single seed was gone.  Perhaps stupidly, I've put some more in just to see.  I've also put a bit of green manure and that seems to be taking off OK.  The tomatoes I planted from cuttings are doing nicely, as are the leeks, but the extra kale I put in is being badly nibbled at.  My newest patch has just been piled up, had some lime and gypsum added, and then composted.  This will be my three sisters patch this summer, with corn, beans and watermelon.  I've got watermelon seeds in the greenhouse, hoping they'll germinate soon, but I'm giving he corn a head start so the beans will have something to grow up. 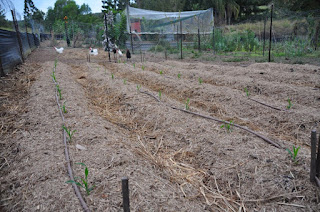 Then lastly, I've put more cardboard down in the raised garden bed patch as the sawdust had composted down and the weeds were coming up.  So more cardboard and more sawdust to come. 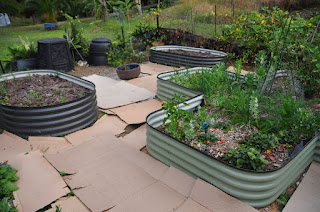 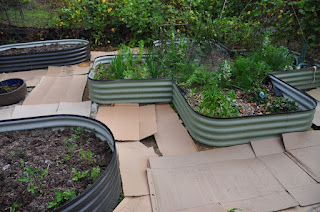 Can you see that the rocket and coriander I'd chopped and dropped under the mushroom compost is growing back.  Tenacious stuff!